Mer is a default-avatared Fragment essentially identical with Hanna Barbara's Pirates of Dark Water (with some differences). It's hosted on rack two, blade four. 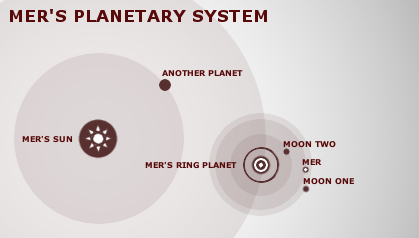 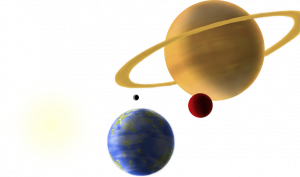 Mer is a moon of a ringed gas giant in the habitable zone of its star.

It is a warm world consisting of considerably more water than land; about 90% of its surface consists of ocean. It has no polar ice caps, but it does have bands of weather, where the equatorial temperatures are higher than those of the poles (where it can get very cold, just not to the point of developing lasting ice).

Due to its erring on the side of warm, it is quite prone to thunderstorms, and completely cloudless days are essentially unheard of.

It's inhabited by several sapient species, the fewest of which live in perfect harmony with each other - but active trade bridges the worst of the cultural clashes and the species do not commonly live in segregated areas. It's more common that groups or clans of a particular species splinter off the mainstream culture of their kind and live by themselves.

The major threat to anyone on Mer is a substance called Dark Water, a sentient, shapeless predator that drifts amongst the oceans and can reshape itself at will, tearing ships into the depths much like the mythological Kraken on Earth… but unfortunately infinitely more resilient as well as considerably more common.

A minor threat on the side is that the degree to which Dark Water has thinned the population of sapient species in general has led to instabilities - and pirates are a real problem, with one pirate lord, Bloth, extorting whole harbour cities.

“This world is cursed with the Black Tide. Each year, it strikes us harder, and more lives are lost. The Treasures of Rule can cure our planet of the Dark Water. The Compass exists to guide the way. The one who was initially destined to take the quest… died a few years ago. In his place, Azur has chosen this quest for himself - and I have no cause to deny him it.” -Firfrey (in CFv3)

One of the spires amongst the Dragon's Maw holds the Treasure aloft. Storms have since whittled at the tower and the Treasure was knocked into the frothing depths below, catching itself against the side of the spire and requiring a search.

Originally protected by a spell to reveal it only to the bloodline of Primus, the Treasure became the ecomancer island's last hope as the Black Tide rolled in to consume it; last ditch attempts guided a root of the Hometree to pull it off its pedestal and leech the energies in an effort to preserve. It was not enough; the Hometree is a mere stump (however grand a stump that may be), with the Treasure in firm grasp of its roots.

The third Treasure has found its way into the clutches of Ezadir, the head 'priest' (for lack of a better word) of a cult of Dark Water that Azur has a history with. While the faith is one in the truest sense of the word, Ezadir believing the Treasures worthless to fight the Dark Water, he is loathe to part with it entirely for free.

The fourth Treasure simply sunk to the bottom of the ocean after attempts to get it to a guarded place ended in proverbial tears. That's where it still is now, patiently waiting for the wielder of the Compass.

Guarded by the legendary Galquin, a massive tusked wyrm, the fifth Treasure lies at the outskirts of an abandoned settlement within the swamps and surreal landscapes of Myragon.

Another Treasure entombed by the sheer endless volume of water native to Mer, this one is slumbers on the seabed immediately next to Dark Water vents.

Unwittingly protected both by swaths of acidic stecca fog and by a cursed creature called Pharyx, the Treasure hides in its lair atop the pinnacle of the sole mountain of Azacea, an island inhabited by a people called Mobo, a tribe of Pandawans who left Pandawa itself many generations ago. As the Pharyx plagues them with death and destruction on a regular basis, feeding off their weak, they are allies waiting to happen.

Used by the Delpha warriors in a network set up deliberately in defence of their entire island from Dark Water, the eighth Treasure is under guard of Queen Malu and her xenophobic people, who would rather enslave the questers than send them on their way, much less give up their only line of defence against the predatory substance.

Stowed away in the walls of the lighthouse for the son of Primus to receive as first aid of his quest, the ninth Treasure was grafted into the hilt of a broken sword, hiding its true nature from anyone who would go as far as find the item unaided. Fortunately, this should pose no challenge to anyone armed with the Compass Of Rule.

In the middle of the ocean of water, a moat of air surrounds an island of solid rock. The Compass indicates the Treasure within, but the only means to enter the island is from below, within the depths beneath the water's surface, where the edges of the island's base lie riddled with cavern entrances. But one might wonder is the moat and thus the way in and out of the island a product of the Treasure's power like the stecca fog on Azacea or not - and would thus its removal trap those questing within?

Kunda is considered the god of wind (also the benign lack thereof) and air and the two Merian moons (partly responsible for the tides as they are). Meanwhile, Vesh and Rael are responsible for the sky-and-sun and ground-and-water respectively. In other words, Mer has layer system of gods.

Also, Kunda's the only good-guy, which is why no one in their right mind would praise anything else.