Dark Arcadia is sovereign nation existing solely on artificial ground. The island is stationary in the Atlantic ocean to the west and slightly south of the Azores, but by design could move if it became a necessity (though certainly not easily, and largely by merit of not being attached to the sea-bed). It takes its stability in storms partly from its size - about 900km² (half the size of Maui) - and partly from a fairly elastic design, letting the structure absorb excess energy.

The demonym of Dark Arcadia, as well as its adjective form, is Arcan, though frequently rendered as d'Arcadian outside the nation.

The nation considers itself a meritocracy, currently run by its founder Francisco Ahlgren, but is internationally considered to be a glorified dictatorship.

Dark Arcadia's timezone is a year-round GMT-2. Its international calling code is +294. 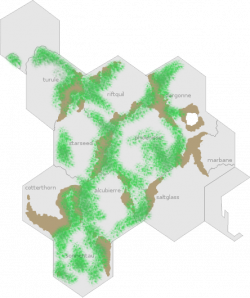 Phoenisse is the heart of the nation, even situated accordingly - fairly far in the north, off to the east (its right on the map, the very approximate whereabouts of where one would expect the heart of a human to be from an onlooker's perspective). It's a largely residential district, as well as containing most of the nation's museums.

Colloquially, it is considered the government district, though there are few buildings designated as such in Dark Arcadia in general, and Phoenisse cannot lay claim to more than average.

Turule is a peripheral district bordered to the north by the Dark Arcadian airport (which is not assigned to any district, itself), and took most damage during Operation Tidefire - a strategic hit, seeing as that the district is the closest the import nation Dark Arcadia has to an industrial sector.

Dark Arcadia is a sliver removed from anarchy. The Archon's purpose, while constitutionally seemingly granted absolute power, is one of being a figurehead both within the nation and to give it a presence in international politics (really only so the nation isn't just nuked or invaded or considered stateless and thus welcome for the taking).

In practise, the nation is anarcho-monarchist and anarcho-capitalist, but this goes unnoticed from the outside world largely due to the nation having a constitution, not to mention the Arcan people largely do not like to call themselves either (see introductory paragraph).

Dark Arcadia is most famous for its constitution, seen by non-Dark Arcadians as philosophical, political and judicial target practise, e.g. in schools, criticised for several prominent points:

An Arcan themselves would chalk most of these points up to a fundamental misunderstanding of the nation. Dark Arcadia's constitution also requires citizens to be psychologically screened before entrance, making duds far less likely to destroy the otherwise fairly fragile system.

A far greater criticism from international sources is Dark Arcadia's unbudging stance toward human rights, having refused to sign any treaties. Given that Ahlgren's continued criticism is that the definitions outlined in these treaties are vague, the nation is often seen as hypocritical by outside observers (see point #2 of constitution criticism).

Dark Arcadia knows of the crime of treason as any other culture. Our treason is not persecuted but no less insidious. It is met with visceral ostracism. Our culture tolerates murderers and thieves more, for their crimes are transparent and their evil clear.

It is to say: 'You are victims, do you not see? No one is looking out for you. What misery lies undiscovered in your life! Look here, open your eyes. These people do not give you your entitled share. These people do not treat you fairly. What have they done for you? They have always had their own interest in mind. You do not matter to them as they matter to you.'

It is an irrefutable scheme. You have no insight into the minds that are not your own. You know not their motivations. You know not what they base their judgements on. It is easy to see malice in the dark where no light reaches. It is easy to be afraid; afraid of the multitudes of tortures man can inflict on man. Like someone given a certain number only to be surprised at its fallaciously overwhelming prevalence, your mind will burn the mediocre from your life as if it did not exist and leave the bad deeds standing bare for display, dominating the landscape.

Our treason is to say:

Give me command of your life and I will protect you.” -Francisco Ahlgren

The nation was 'founded' in 2027 by Francisco Ahlgren at age 19, first existing as a serious micronation amongst the internet on a server physically based in India, rapidly adopting followers. Construction of the island began in 2029 after Ahlgren struck a deal with a company. The 'foundation work' gathered much international interest, and given its position in international waters much like the Principality of Sealand, was quickly recognised even by the uninformed as a micronation.

Unlike Sealand, a significant economic interest rolled toward Dark Arcadia, primarily due to its position in the ocean catering first to 'pit stops' between Europe and America, then to a pleasant means of being at better availability for both of those major timezones, crafting an overlap, and becoming a hub for several large upstart companies.

Growth has been rapid, though recently abating. Current construction is in the south-east of the island.

Politically, the dynamically designed nation has been grossly stagnant, in that Ahlgren has lead it for the entirety of its existence, which has not helped international perception any.

Dark Arcadia's culture has partly manifested itself by design. Being a freshly constructed nation founded in such radically different ways than other nations, Ahlgren has had much control over the philosophies applied.

The five most prominent aspects of Dark Arcadian cultures as far as outsiders are concerned are:

Beyond these internationally recognised quirks, Dark Arcadia is rich with own culture, such as that public transport is the greatly preferred method of transport, and that most Arcan work is done from home.

With no state-funded social security, Arcans tend to form strong ties to their neighbours, and financial aid is readily given to those in need (providing, of course, that they're not arseholes).

Classically familial ties are as weak or strong as the individuals in them want them to be - clusters tend to form more by shared interests than by biological relation, such as a man born Samuel Delgado becoming the Arcan citizen Paul Greyhound to live with the emotionally adopted brother Justin Greyhound (originally Caine Ahlgren). Though as much as names are not indicative of familial ties, they are also not indicative of social bonds or the lack thereof; Justin very much looks up to and respects his father, despite opting out of a shared surname.

Education in Dark Arcadia is fundamentally decentralised, but a few sweeping generalisations can be made about the curriculum based on what Arcan culture at large seems to consider necessary and practical (roughly in order of importance):

Dark Arcadia has no military, but is protected by Europe.

A strong political bond is presumed to exist between the two nations, but they're secretive about it, excepting Europe's undying loyalty to Dark Arcadia, militaristically. In other political topics (as represented on the Arcan side by Francisco), the nations vehemently disagree on many subjects.

Dark Arcadia currently grants citizenship to select dolphins, and political sanctuary for any others that wish it. Communication with these creatures is sub-optimal, currently, but the Dark Arcadian pet project, the Cetacean Communication Project, involves improving the archaic methods currently employed in favour of a more fluid/organic virtual reality interface.

To nutshell, killing a dolphin in Dark Arcadian waters is treated as murder.